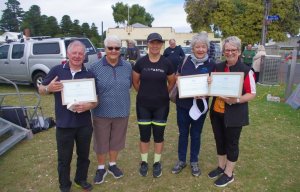 Emotional Awardees recognised for Decades of Service to the Murray to Moyne.
Congratulations to Norma Decker, Team Outpatients 112 - Rural North West Health Hopetoun.  Over the past 24 years Norma has supported team 112, in a variety of positions from secretary through to catering officer. Norma is dedicated to the safety and welfare of the team during the event and also regularly checks in on the team during training sessions and providing plenty of motivation along the way. Norma even jumped on a bike one year and rode a 26km stretch to motivate others to do the same. Team Outpatients Hopetoun, raise money for Rural Northwest Health, where Norma has worked for 26 years. She is actively involved in the teams fundraising efforts and is dedicated to improving the lives of the residents of Rural Northwest Health.

Congratulations Jenny & Jeff McLean - M2M Committee.  Jenny & Jeff McLean have been involved with the M2M for 32 years in a variety of capacities. Woody himself got Jeff onto a bike in the early years of the M2M, which kickstarted a lifelong passion for the event. Jeff and Jenny have been unwavering in their efforts to keep Graham's legacy going and both are integral members of the M2M Committee. Over the years Jenny has taken on a wide range of roles and has been the office manager for the M2M for almost too many years to count! The event would not run without Jenny's organisation of everything the teams and officials need to undertake their roles as well as her work in Hamilton coordinating team check-ins for the overnight stop. Jeff has ridden in many open cycling races, both here in Australia and in Europe, his expertise is greatly valued. Jeff has also been inspirational in his passion for the event, and his contribution in developing many of the M2M policies required to run such an iconic event.  Jeff has been Ride Director since 1992 and he organises all the local government and Vic Roads permits required, as well as being Treasurer.
The M2M also recognised the following for their contribution to their Teams and efforts in supporting Graeme's ethos and legacy:

The event De-Brief was conducted with M2M Officials on 11 April and the following issues were discussed.

The 35th M2M was conducted with a moderately strong head wind directly from the South.  The Mildura teams suffered the most with the wind directly up the road - no shelter; whereas Swan Hill and Echuca faired better with more side and some tail wind sections.  Temperatures were in the pleasant range and teams made good time on both Swan Hill and Echuca routes. The evening ride after dark was not cold and many teams made it into Hamilton from around 10:30 pm.  Again the Sunday ride down from Hamilton was delightful with the Macarthur and Penshurst routes showcasing the Western District.  A big thankyou to all Team Captains for all your hard work in preparing and organising your teams in this challenging environment.  We also thank all participants for following our safety requirements and we look forward to the 36th M2M in 2023.

Chief Motor Cycle Marshal - Barry Moran reported that he was very happy with the behaviour of riders and team vehicle drivers this year.   We always have some minor issues, but overall we had incident free event.  One major issue has been that at dusk or during the evening, some riders are left on their own - this was not a problem this year.  Some of the road work conditions from Mildura were identified on the trip up to Mildura, but by Saturday, Regional Roads Vic, had either sealed or improved the surface greatly.  We would like to recognise Regional Roads Vic for their quick assistance in these matters.

Some further comments :  A marshal had to speak to one team parked on the opposite side of the road for a change over. A few instances of teams not pulling off the road far enough, causing teams to stand out on the road. Echuca motor bike marshals lost two riders, Mildura lost 1 rider due to illness, but the remaining Marshals did an excellent job.
Our Covid 19 Officer - Sophie O'Keeffe reported that " The Covid paper work created some extra work, but everything seemed to work well.  The number of teams on the Echuca route did create some problems in checking each team and each form once the event commenced - but the officials were able to follow-up any issues once the ride started.  One team did have to withdraw from the event due to a Covid positive on the Saturday morning  But the Covid Safe Plan was followed and everyone was kept safe.

Port Fairy & Hamilton Stop Coordinator - Peter Goy reported that he was very happy with setting up of signs on the 2 approaches into Hamilton; The sign-in by teams (in person or by phone worked efficiently) and the operations of the catering (Lions Breakfast and Coffee van) worked well.  The egg & bacon rolls were very popular !  We did have some issues with communications with the Hamilton Showground administrators, but these were soon ironed out. Port Fairy worked well again this year and we wish to thank the VicPol Highway Patrol for providing support for the 3 Chain Road / Princes Highway  and Bank Street / Princes Hwy intersections.  Parking worked well, and the presentation trailer and pa system were very effective.  Peter had over 30 volunteers in and around Port Fairy manning the corners and helping set up the Finish Zone and we thank them all for their assistance this year.

The Hawkesdale food stop did work this year - although the lack of communication with the group prior to the event was an issue.  Macarthur Lions food stop (pancakes, rolls and coffee) was again a welcome boost for riders on Sunday morning.

First Aide Chief, Ailsa Partridge reported an incident free weekend, and she praised the riders and team support for their concentration and following team safety guidelines.

Finish / Presentation:  We received many favorable comments from riders and Team Captains about the conduct of the event - especially given the Covid-19 situation.

Other comments included:  The motor bike marshals were excellent support for Riders and Officials;  Suggested another start point for Swan Hill be identified due to a traffic issue with the round abouts and a stop signal, complicating the route out of the CBD.  The  “Ken Harris” reserve has been suggested as an alternative. A suggestion was made that we have designated breaks for officials and team supporters who are driving vehicles.

Congratulations to the following for reaching significate Milestones this year:

M2M Dates for 2023 - Saturday 1 & Sunday 2 April 2023
These dates were selected based on the following considerations:

We wish thank all of our 2022 event sponsors for their support and generosity.

The M2M is a community organisation established by Graham "Woody" Woodrup to provide support to Hospitals and Healthcare & Wellbeing Services.  Woody threw out the challenge to everyone he met to get on a bike and have a go, he also set the example to be generous with your talents and help others whenever you have the opportunity.